LATEST
Fourth Annual Travel and Adventure Show brings the...
Barack Obama is the architect behind Donald Trump...
COVID-19 menace and Bernie Bros = Selling panic...
MLB’s Astros sign stealing scandal more worrisome than...
Some facts behind the health benefits of a...
Living with ALS and learning to use a...
Amy Jackson Berman and Roger Stone: Judge not...
What young people don’t know about history can...
COVID-19 panic obliterates US markets in wild Monday...
Is any part of America ready for a...
Home Uncategorized Obamacare Fail: Stocks’ dead cat bounce conceals trouble
Uncategorized

WASHINGTON, February 4, 2014 – Stock markets are staging a dead cat bounce this morning after yesterday’s 300+ point debacle on the Dow. But the Maven is not impressed. Things are wobbly on Wall Street these days as we noted in last evening’s column (February3), due in part to poor economic indicators and weakening foreign currencies. A more important key reason might be the 2014 changes in the tax code which now penalizes “the rich” if their stock trading turns out to be too successful.

But as we noted in our previous column, the real looming threat to the economy, the markets, what’s left of the middle class, and the entire country for that matter is the increasing fiscal and healthcare disaster collectively known as Obamacare. Don’t believe us? Even the liberal-leaning Washington insider rag The Hill chimed in this morning with this not-so-surprising bit of news:

“The new healthcare law will slow economic growth over the next decade, costing the nation about 2.5 million jobs and contributing to a $1 trillion increase in projected deficits, the Congressional Budget Office said in a report released Tuesday.

“The non-partisan agency’s report found that the healthcare law’s negative effects on the economy will be ‘substantially larger’ than what it had previously anticipated.”


Echoing Claude Rains’ immortal line in film classic “Casablanca,” the Maven is “shocked, shocked” at both The Hill’s and the CBO’s keen insights. We saw this coming on the very day this disastrous legislation was crammed down Americans’ throats by a radical, runaway, Democrat-controlled Congress.

[youtube]http://www.youtube.com/watch?v=-Gf8NK1WAOc[/youtube]We also foresaw the negative perestroika that would occur and is now occurring in the labor market. Somehow, the clearly overcompensated CBO essentially agrees with our much less expensive, back-of-the-envelope calculations as well, supplying us with the stark and dismal numbers according to The Hill’s report:

“The CBO is now estimating that the law will reduce labor force compensation by 1 percent from 2017 to 2024, twice the reduction it previously had projected.

“This will decrease the number of full-time equivalent jobs in 2021 by 2.3 million, CBO said. It had previously estimated the decrease would be 800,000.”

“The budget scorekeeper said this decrease would be caused partly by people leaving the workforce in response to lower wages offered by employers, and increased insurance coverage through the healthcare law.

“The agency also said employer penalties in the law will decrease wages, and that part-year workers will be slower to return to the work force because they will seek to retain ObamaCare insurance subsidies.”

(Italics provided by the Maven.)

By “part-year” we assume that The Hill is employing a euphemism for “part-time,” as that’s another way employers and formerly full-time employees are incentivized to cut working hours and thus salaries. It’s all a vicious circle, a chicken-or-egg exercise that still equals the complete destruction of the middle class as well as the “fundamental (socialist) transformation” of American society that Barack Obama promised and gullible voters unknowingly bought. 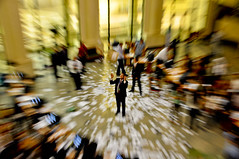 Which brings us back to the markets. To mix our metaphors a bit, Obamacare and its predictable fallout looms large over the stock market in 2014, a massive Sword of Damocles hanging over the American people that in the end will claim many, many heads.


Both the Federal government and the financial press corps lecture us, ad nauseam, on how crucially important “the consumer” (i.e., you and me) and “consumer spending” are not only to growth but also to the health of the entire economy.

The problem is, the rolling Obamacare debacle is even now surrounding and preparing to entirely crush “the consumer” by depriving him, on one front, of the ability to earn a living wage; and on the other, by forcing him to spend a substantial amount of whatever compensation remains on unwanted, overpriced, rationed healthcare.

Aside from food and shelter, “consumption” only happens when consumers have at least some disposable income that allows them to “consume.” But when wages are effectively reduced, particularly due to employers’ reductions in hours to evade Obamacare requirements and expenses, disposable dollars are cut or eliminated. Without these disposable dollars, consumers can’t consume, which in turn will have a horrific ripple effect particularly on discretionary spending but will also serve to cripple even spending on consumer staples as well.

As the Maven wrote in this column yesterday, this “may be the elephant in the room, the primary reason behind the market’s current worrisome volatility and downside bias: the unknown fallout from the disastrous implementation of the disastrous Obamacare legislation.” But the just-released CBO report is making this fallout less unknown today.

We hope enough low-information voters will finally puzzle this out in November. Otherwise, as they used to say on the campy old “Batman” TV series in the 1960s, “the worst is yet to come.”

We repeat last evening’s advice, which still stands. Traders should be hedged right now, or mostly on the sidelines. Utilities and selected REITs or REIT ETFs can be held here to a limited degree along with intermediate term bond ETFs But that’s about it. Otherwise, depending on conditions, what remains in portfolios should likely be hedged by ETFs like SH (the short, or “inverse” S&P 500 ETF), SDS (the inverse S&P x2) or HDGE, another ETF with excellent bearish credentials in a down market.

Use extreme caution with SDS, which is not intended for amateurs. It’s fast, volatile, useful for only a day or two and needs to be monitored constantly. If you can’t do that or if your broker won’t, it’s best to avoid this one altogether.

Disclaimer: The author of this column maintains several active trading and investment portfolios and owns residential and investment real estate. He currently owns shares of SH and HDGE.

Positions mentioned above describe this author’s own investment decisions and should not be construed as either buy or sell recommendations. The current market is highly treacherous and all investors travel at their own risk. Caution should be exercised at all times.

Illustrations, charts, commentary, and analysis are only the author’s view of current or historical market activity and don’t constitute a recommendation to buy or sell any security or contract. Views, indications, and analysis aren’t necessarily predictive of any future market or government action. Rather they indicate the author’s opinion as to a range of possibilities that may occur going forward.

References to other reporters, analysts, pundits, or commentators are illustrative only and do not necessarily represent an endorsement of such individuals’ points of view. If specific investment vehicles are mentioned in any article under this column heading, the author will always fully disclose any active or contemplated investments in said vehicles.

Biographical Note: Dateline Award-winning music and theater critic for The Connection Newspapers and the Reston-Fairfax Times, Terry was the music critic for the Washington Times print edition (1994-2010) and online Communities (2010-2014). Since 2014, he has been the Business and Entertainment Editor for Communities Digital News (CDN). A former stockbroker and a writer and editor with many interests, he served as editor under contract from the White House Office of Science and Technology Policy (OSTP) and continues to write on science and business topics. He is a graduate of Georgetown University (BA, MA) and the University of South Carolina where he was awarded a Ph.D. in English and American Literature and co-founded one of the earliest Writing Labs in the country. Twitter: @terryp17

CBO: Obama’s policies will slow economic growth over the next decade

The Oscars and the Hollywood Idiots: Did anybody...

The State of the Union fallout – Presidential...