LATEST
The Car Coach: How to buy collector –...
The Car Coach: How much can you afford...
The Car Coach: The 2020 Lincoln Navigator luxury...
An Al Goodwyn Cartoon: One of these things...
What will be the spark that ignites war...
The Deep State and Big Tech will brand...
Simon Parkes: How do you tell the inside...
A treacherous options expiration day upends pre-MLK holiday...
Forget security: Joe Biden’s inauguration is as irrelevant...
Democrats’ Wall of Jericho is falling: Trump declasses...
Home World NewsRussia Moscow’s magnificent underground metro station museums
RussiaTravel

MOSCOW, January 25, 2014 – As the 2014 Winter Olympics are in the final stages of preparation to showcase the greatest athletes on the planet in Sochi, some travelers may have another unexpected treat when they arrive.

That’s because the metro stations of Moscow are part of the most beautiful subway system in the world.

Josef Stalin called the stations “people’s palaces” because of their elaborate artistic and architectural designs.  They also were the largest civilian construction project in the history of the USSR. No less important to the program was Stalin’s immense ego which led him to feature designs  reminiscent of an “underground artificial sun.”

By using a mostly volunteer workforce at a time when capitalism was suffering through the Depression, Stalin aimed to impress the world with his country’s technology, industrialization and art, demonstrating the superiority of socialism.

With elegant chandeliers, friezes, marble archways, bronze statues, stained glass windows and bas-reliefs, each metro station in Moscow was unique with its own character and personality.

The earliest stations are perhaps the most ornate and eclectic because of the intensity with which Stalin sought completion. Among the artistic depictions, as would be expected, are representations with particularly Soviet cultural themes such as sports, industry, agriculture, history and, of course, the Revolution.

The first 13 stations, opened in 1935,  are the primary underground locations to visit.

One of the earliest stations is Kievskaya which opened in 1937. The ultra-lavish mosaic in the central hall celebrates the 300-year-old union between Ukraine and Russia. Today it consists of three connecting halls.

Another of Stalin’s “originals”, Kurskaya, dating to 1938, emphasizes mosaics that highlight the strength and fortitude of Soviet society.

Among the most beautiful, and perhaps the most famous, Mayakovskaya, opened in 1938. Dedicated to the Russian poet Vladimir Maykovsky, it is one of the deepest stations in the city because it was also designed for use as a bomb shelter.

Believe it or not, another metro system, called Metro 2, was created beneath the public metro system and is being used today as an escape route for high government officials..

With seven hexagonal mosaic panels by the famed Russian artist Frolov, Novokuznetskaya is cultural gem though it did not open until 1943. The ceilings are dedicated to Soviet military operations and industry. 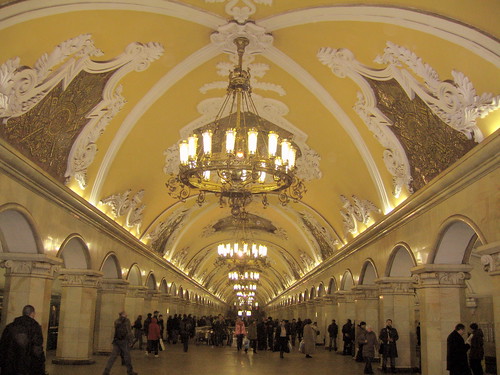 Don’t be misled, not all of Moscow’s stations are grand. In the late 1950s when Nikita Khruschev was in power, the stations became less extravagant, less expensive and more formulaic and undistinguished.

Khruschev’s spartan influence only lasted about 20 years. Since the mid-1970s the elaborate architecture of the metro has returned with more contemporary designs, although not to the degree or depth they were under Stalin.


Komsomolskaya is one of the most popular stations constructed during the Khruschev era. It is a favorite because of its Baroque style and arched yellow ceiling.

Another station under Khruschev’s leadership is Vorobyovy Gory. Built in 1959, it rates a mention because it is the first metro station ever constructed on a bridge.

Moving to more contemporary stations, Tsvetnoy Boulevard, which opened in 1988, features lovely glass mosaics. To visit the most popular and oldest Moscow Circus, this is the one to take.

No list would be complete without mentioning Fyodor Dostoevsky. The 2010 Dostoevskaya Station is one of the newest, and it is completely dedicated to the works of the great Russian author.

Rounding out the list, one of the most popular stations only came into existence in 2003. In a city where the metro stations are known for their depth, Park Pobedy is the deepest. At 414 feet, the escalators are the longest in Europe, taking about three minutes to arrive at the street. Or, for the hardy, you can climb the 740 steps to the surface.

Two huge panels decorate the walls of Park Pobedy with enameled depictions of the War of 1812 in the north hall and another highlighting the victory over Nazism in the south hall.

The system is color coded, but it is useful to have a map written in Russian so you can visually match the station stops.

Be alert for pickpockets, especially during peak hours when the metros are busiest. The best time to ride without crowds is between noon and 2 pm.

Though many stations are magnificent, the rolling stock can be quite old, so do not expect stations to be quiet.

About the Author: Bob Taylor is a veteran writer who has traveled throughout the world. Taylor was an award winning television producer/reporter/anchor before focusing on writing about international events, people and cultures around the globe. He is founder of The Magellan Travel Club (www.MagellanTravelClub.com).

His goal is to visit 100 countries or more during his lifetime.

Bob Taylor has been travel writer for more than three decades. Following a career as an award winning sports producer/anchor, Taylor’s media production business produced marketing presentations for Switzerland Tourism, Rail Europe, the Finnish Tourist Board, Japan Railways Group, the Swedish Travel & Tourism Council and the Swiss Travel System among others. He is founder of The Magellan Travel Club (www.MagellanTravelClub.com) and his goal is to visit 100 countries or more during his lifetime.

A Michelin starred Thanksgiving from the Four Seasons...

The Joseph Hotel in Nashville: A luxurious feast...

Hotel Brunelleschi: Magnificence and history in the heart...

Travel Nicaragua: From its cities to eco lodges,...