WASHINGTON, January 24, 2014 — An independent watchdog group, the Privacy and Civil Liberties Oversight Board, released its review of Section 215 of the USA Patriot Act on Thursday. Section 215 allows the F.B.I. to obtain business records deemed “relevant” to an investigation, and is the basis for the National Security Agency program that collects Americans’ phone records.

The 238-page report is the most extensive review to date of Section 215. The board concluded that the NSA’s phone data collection program “lacks a viable legal foundation under Section 215, implicates constitutional concerns under the First and Fourth Amendments, raises serious threats to privacy and civil liberties as a policy matter, and has shown only limited value.”

That is, the board concluded that the program is ineffective and illegal, though two of the five board members dissented on the programs illegality. In a separate document, they said that legality should be determined by the courts.

Members of the board were unanimous in suggesting stringent new limitations on the program, either to reform the program or in preparation to wind it down and eliminate it. Some of their recommendations echoed proposals made by President Obama last week in his speech on the NSA, but they go beyond Obama’s proposals.


The board found specifically that:

White House press secretary Jay Carney responded for the Obama Administration. “On the issue of 215, we simply disagree with the board’s analysis on the legality of the program.” 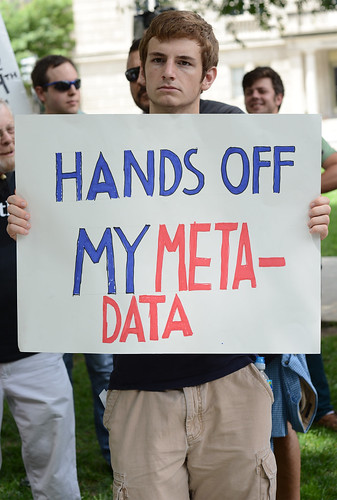 Rally against mass surveillance, by Stephen Melkisethian for Flicker (2013)

Since then, new revelations have been released with enough frequency to keep the story on the front pages. President Obama at first dismissed Snowden’s revelations, then admitted possible errors, and has since then been forced to apologize to world leaders, express his deep concern, and last week to make a major speech on the subject.

Discussion since Snowden’s first revelations has focused on two things: the Obama Administration’s responsibility for expanding the government’s mandate to perform such surveillance under the Patriot Act, and the role of Edward Snowden.

Whether Snowden is a hero or a criminal is a matter for the courts to decide. There’s no reason he can’t be both. The New York Times and The Guardian have both argued on their editorial pages that Snowden should receive clemency, given the important public value of the secrets he revealed. Attorney General Eric Holder seemed to hold open the possibility of clemency in remarks on January 23, when he said that if Snowden wants to return to the U.S. to “enter a plea, we would engage with his lawyers.”

Snowden, his motives, and the obligations imposed by his security clearance are side issues. Another side issue is the Obama Administration’s role in the data-gathering endeavor. This remains of huge political interest and will continue to be used as a political cudgel against Obama. That doesn’t mean that it’s unimportant, but it is peripheral to the real issues.

The real issues are more basic: How do we balance the needs of national security with rights of privacy? How can we best monitor the domestic intelligence gathering activities of government agencies while maintaining the secrecy that allows them to function? And most importantly, to what extent should we trust the government to gather data on every American that could, in principle, allow an investigator to lay bare an individual’s every communication, financial transaction, the sum total of a person’s social existence?

The Obama Administration has argued that no such abuse has occurred. There are two obvious responses to that: “How do we know that you’re not lying?” and “If you aren’t lying, how can we be sure that this power won’t be abused in the future?”

The answer to the first question is, we don’t. We do know that the administration has already lied about its surveillance programs. At a March 12 Congressional hearing, National Intelligence Director James Clapper was asked, “Does the NSA collect any type of data at all on millions or hundreds of millions of Americans?” Clapper replied, “No sir … not wittingly.”

In an interview with NBC’s Andrea Mitchell, Clapper admitted that that testimony was a lie. “I thought, though in retrospect, I was asked [a] ‘when are you going to … stop beating your wife’ kind of question, which is … not answerable necessarily by a simple yes or no. So I responded in what I thought was the most truthful, or least untruthful, manner by saying, ‘No.’ ”


The question was not an ambush; it was given to Clapper beforehand, granting him a day to craft this “least untruthful” of responses.

How can we know this power won’t be abused in the future? We can’t. The Obama Administration is incapable of assuring us that the information gathered by the NSA will not be abused. It forfeited the benefit of any doubt with Clapper’s lie. Even if we believed the administration, we have no idea how effective the oversight is on these programs, and so we can’t know whether it has failed.

Administration officials and some members of Congress have argued that the surveillance programs are an important element of our defense against another 9/11-type terrorist incident. They weigh the threat of terrorism against the loss of privacy and conclude that the demands of national security should take precedence.

The argument they present assumes that the programs must operate completely in the dark, with appropriate, yet equally dark oversight. The only way to avoid abuse of these programs in a democracy is by transparency and sunlight; we can have no confidence in the oversight, however effective it may be, if it is as secret as the programs it guards us from. We must be able to discuss these programs, in general if not in specifics, and there must be a way to let Americans know something about what is permitted and what is done by way of domestic surveillance.

President Obama said at a June 7 press conference, “We’ve got congressional oversight and judicial oversight and if people can’t trust not only the executive branch but also don’t trust Congress and don’t trust federal judges to make sure we’re abiding by the Constitution, due process and the rule of law, then we’re gonna have some problems here.”

That in a nutshell is the problem. The institutions that are supposed to protect us from intelligence abuses have already failed, and in spectacular fashion. We trusted the intelligence community and their political overseers prior to the Iraq war. The Bush Administration leaked some classified information to support their assertions about other material that remained classified, but their leaks were selective, hence deceptive.

Do we really want to trust the intelligence community and its political masters again, believing again that they really are doing what’s right and necessary, and no more, to fight this other, more secrecy-shrouded war, the war on terror?

Trust is essential to our political system, and it’s essential to the way we deal with those parts of government that must remain secret. But trust in the institutions that oversee the intelligence community and its surveillance programs has been betrayed. The Obama Administration has not shown itself capable of rebuilding that trust.

Ronald Reagan was fond of saying, “trust, but verify.” In this situation “verify” can only mean public, transparent oversight of some kind. Without it, we should never assume that the power held by the NSA isn’t being abused, and if we can’t assume that, we should not grant the NSA that power. The Privacy and Civil Liberties Oversight Board is correct: The NSA programs based on Section 215 should be eliminated.

James Picht is the Senior Editor for Communities Politics. He teaches economics and Russian at the Louisiana Scholars' College in Natchitoches, La. After earning his doctorate in economics, he spent several years doing economic development work in Moscow and the new independent states of the former Soviet Union for the U.S. government, the Asian Development Bank, and as a private contractor. He has also worked in Latin America, the former USSR and the Balkans as an educator, teaching courses in economics and law at universities in Ukraine and at finance ministries throughout the region. He has been writing at the Communities since 2009.

The Deep State and Big Tech will brand...

Simon Parkes: How do you tell the inside...