LATEST
What will be the spark that ignites war...
The Deep State and Big Tech will brand...
Simon Parkes: How do you tell the inside...
A treacherous options expiration day upends pre-MLK holiday...
Forget security: Joe Biden’s inauguration is as irrelevant...
Democrats’ Wall of Jericho is falling: Trump declasses...
NFL 2020-2021 Divisional Playoffs: The Preview and Bettor’s...
US Stock Market Schedule for the MLK Jr...
Social media tyrants at Twitter-Facebook say submit and...
The Democrats’ unending Presidential Impeachment and insurrection fears
Home PoliticsCommentary How to stop the NSA collection of your data: Turn the water off
CommentaryPolitics

How to stop the NSA collection of your data: Turn the water off

HOUSTON, February 23, 2014 — The NSA has taken snooping to a new level with the news that the Orwellian big brother of the U.S. Government wants to create a “national license-plate recognition database.”

The Department of Homeland Security Immigration and Customs Enforcement agency (ICE) stressed that the database “could only be accessed in conjunction with ongoing criminal investigations or to locate wanted individuals.”

The goal is to capture the license plates of cars on American roads in order to ferret out possible “fugitive illegal immigrants.” However, that database would eventually include the license plates — and all the information attached to those plates, including the location, date and time of capture — of every car in the United States.

The NSA already tracks the details of every phone call, every text message, and every email, and it was recently revealed that the NSA even follows people who play video games like World of Warcraft.


However, a small group of patriots at the Tenth Amendment Center may have found a way to put a halt to all of this unconstitutional snooping and spying — and the best part is that it doesn’t involve the ruling class in Washington or the complications and unpredictability of the judiciary. It can be initiated simply, quickly and easily at the state level.

The premise is simple: to store every phone call, email, text message, Facebook post, and more on all 300 million Americans requires many, many computers with massive amounts of storage space. To keep these databanks operating, these computers require literally millions of gallons of water per day to keep them cool and to avoid overheating.

If the NSA locates its facilities anywhere other than the federally controlled District of Columbia, it must buy its water from the states in which its facilities are located.

There is no legal requirement that sovereign state governments provide resources to help the federal government in unconstitutional actions. Therefore the idea comes down to this: If state governments shut off the NSA’s access to water, the computers that both store and snoop for illegal information will be unable to function, effectively bringing a complete halt to the illegal spying. Turn off the water, turn off the NSA.

The NSA recently opened its new one-million square foot “data storage complex” in Bluffdale, Utah. Access to large amounts of water at cheap rates was a huge consideration in the NSA’s decision to choose Bluffdale. Harvey Davis, NSA director of installations and logistics, explicitly said that he chose Utah for the cheap and plentiful access to water when he announced that the data center would be built in Bluffdale. 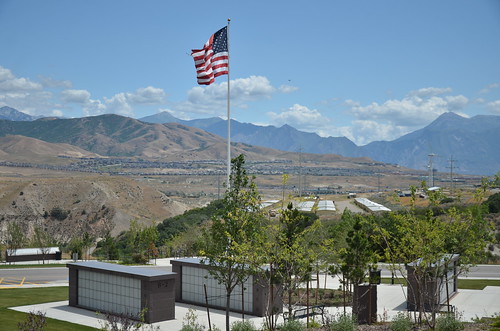 “Utah is a wonderful place with abundant and inexpensive power,” he said. “Plenty of sources of water for cooling. Utah, because of the facility and the utilities, just came out far and ahead of everywhere else.”

A state refusing to comply with unconstitutional orders of the federal government is rare, but it has happened. Thomas Jefferson was the first to use the idea in the 1790s to fight against the Alien and Sedition Acts which, among other things, outlawed criticism of the federal government. Jefferson called the act of a state passing a law that contradicts and overrules an unconstitutional federal law nullification.


The Alien and Sedition Acts and the Fugitive Slave Act were two heinous and blatantly unconstitutional actions by the federal government. The states were right to fight back. We must do the same today against the NSA, which has transformed this country into a surveillance state where the government watches and tracks our every move. That is offensive to the American ideal of freedom and liberty. We The People must again fight back.

The first step in fighting back is to introduce legislation at the state level that incorporates the ideas articulted in the Fourth Amendment Protection Act, which is the Tenth Amendment Center’s proposed legislation.

The Act does two primary things: First, it restricts the state from assisting, supporting, or providing services to any agency that  authorizes or collects electronic data or metadata of any person without a specific warrant, which must describe the specific person, place and thing to be searched and seized; and, it restricts the state or the federal government from using any information obtained by these means in any legal action, civil or criminal.

Utah may be the primary focus right now, but it is shocking how expansive the NSA’s reach is. The NSA has partnered with 42 state governments and over 160 state universities in order to indoctrinate the young to their unconstitutional ways, and force state taxpayers to fund further research, development and expansion of the NSA’s warrantless data-collection capabilities. They have active facilities in Texas, Georgia, Tennessee, Colorado, West Virginia and Washington. These are only the known facilities, so it is very important that this bill be passed in every state and not just Utah.

If We The People do not stop this unconstitutional intrusion into each and every aspect of our lives, it will never be stopped. The government will to use this information against us in many ways, including as evidence in lawsuits, and to locate and attack political opponents with the IRS.

We have a duty to our children and the generations that follow to preserve the liberty and freedom that every generation of Americans has passed on to the next. Sam Adams famously said, “The liberties of our Country, the freedom of our civil constitution are worth defending at all hazards and it is our duty to defend them against all attacks … It will bring an everlasting mark of infamy on the present generation if we should suffer them to be wrested from us by violence without a struggle; or be cheated out of them by the artifices of false and designing men.”

We have a duty to stop the NSA. Go to OffNow.org for more information.

James Edwards is a tireless advocate for federalism and minimizing the impact the federal government has on all of our lives.

Computers and Music: Review of the Kontakt 5 Player

What will be the spark that ignites war...

The Deep State and Big Tech will brand...

Simon Parkes: How do you tell the inside...