CLEVELAND, February 25, 2017 – Cleveland, Ohio was once one of the nation’s biggest cities, an industrial powerhouse loaded with steel mills, factories, and even serving as the original home of John D. Rockefeller’s Standard Oil. But as American industry precipitously declined in the Rust Belt after the Second World War in manufacturing cities like Detroit and Cleveland, many one-time industrial landmarks have either disappeared or are on their way out.

A 1924 aerial view of the Lake Shore property in Cleveland includes a glimpse of the former Gordon Gardens amusement park along the plant’s west side. That year, a new turbine gave Lake Shore a generating capacity of 284,000 kW, making it the largest steam-electric generating plant in the world at that time. (CC 2.0 license, via First Energy website)

Case in point: The city’s historic, coal-burning Lake Shore power plant. This vintage facility once generated a significant amount of electricity for Cleveland’s homes and businesses. No, Barack Obama didn’t exactly shut this plant down personally, although his senseless anti-coal crusade didn’t exactly help. A relatively small plant by today’s standards go, the Lake Shore facility instead gradually became obsolete, leading to its complete shutdown some two years ago.

In the early a.m., Friday, February 23, the last remaining structures of the Lake Shore plant were demolished in a controlled implosion, disappearing in spectacular fashion as described in this release issued from business information service PRNewswire:

“[The demolition] was the culmination of more than 18 months of demolition work at the site. To prepare for Saturday’s activities, a professional explosives demolition team from Tulsa, [Oklahoma], set charges in the structures for the explosives. Some of the concrete and rebar were removed from the structures to direct the angle of the buildings’ fall. Dust suppression systems consisting of large fans and water sprayers surrounded the site to help contain the concrete and dirt particles…

“The Lake Shore plant was fully retired in early 2015, and demolition preparation activities began that summer.  Property clean-up, removal of scrap metal and concrete debris, and planting grass on the site is expected to be complete by this fall.  Following the demolition, FirstEnergy will continue to own the 57-acre site and to operate the electric transmission equipment located on the property.”

The Lake Shore demolition activities occurred late Thursday evening after the adjacent superhighway was temporarily closed due to potential safety concerns. The nighttime demo was recorded in a pair of spectacular videos, which we present below.

Below: Lake Shore power plant demo as captured on the ground and posted online via YouTube. Action begins at approximately 40 seconds into the video: 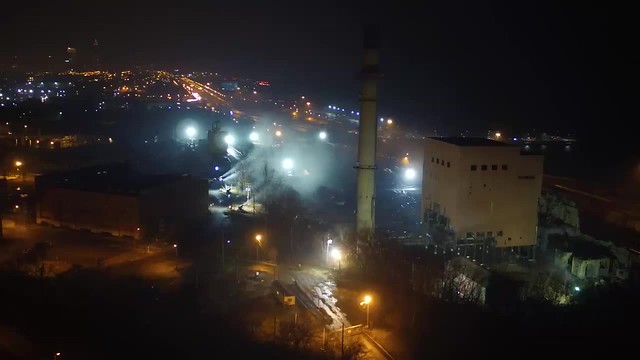 Biographical Note: Dateline Award-winning music and theater critic for The Connection Newspapers and the Reston-Fairfax Times, Terry was the music critic for the Washington Times print edition (1994-2010) and online Communities (2010-2014). Since 2014, he has been the Senior Business and Entertainment Editor for Communities Digital News (CDN). A former stockbroker and a writer and editor with many interests, he served as editor under contract from the White House Office of Science and Technology Policy (OSTP) and continues to write on science and business topics. He is a graduate of Georgetown University (BA, MA) and the University of South Carolina where he was awarded a Ph.D. in English and American Literature and co-founded one of the earliest Writing Labs in the country. Twitter: @terryp17